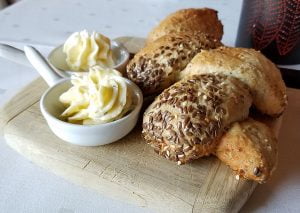 A Slice of Life

Birdseed Bread is a mainstay on the menu. It was first introduced in 1988 by Marcia Dunsmore, a renowned baker and one of the chefs at the Inn at the time. Marcia created the recipe using steel cut oats, traditional oats, milk, bread flour and yeast. The combination gives it a unique taste and texture that’s slightly chewy and sweet. A variety of seeds, such as flax, poppy and sunflower, coat the top giving the bread its distinctive look and name. Birdseed Bread is featured in a variety of ways including rolls, sandwich bread and large rounds. Try the grilled cheese made with Birdseed Bread. It’s one of the most popular sandwich options at The Settlers Inn. 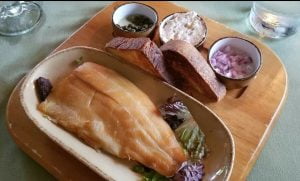 A commitment to farm-to-table dining is the overriding principle of The Settlers Inn. Founder Grant Genzlinger was interested in sourcing local ingredients from the very beginning. When creating a menu, he looked no further than a private hatchery in nearby Blooming Grove, PA.  Established in 1871, it is the oldest stream hatchery in the United States. Trout are raised in a stream hatchery that mimics the natural habitat of the fish. The connection not only allowed The Settlers Inn to support local family farming, but also procure high quality trout for some of the restaurant’s most popular menu items. Dishes feature Brook Trout, a member of the Char Family that has a third of the fat of other trout. It boasts a very rich, dense flavor without being fishy. Trout is featured year-round in a variety of entrees. The signature Smoked Trout Platter utilizes a hot smoke. The spring menu often boasts Brook Trout stuffed with fiddleheads, watercress and ramps wrapped with bacon and lemon slices. 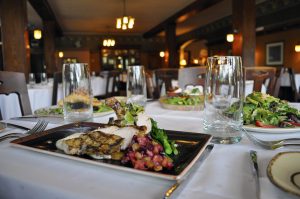 Plan a Summer Foodies Getaway to experience signature dishes from The Settlers Inn. During warmer weather, meals on the patio or in the garden give new meaning to the phrase al fresco. The mid-week special includes an overnight stay for two, a dining credit and a welcome wine.