If you‘ve dined at The Settlers Inn, Glass- wine.bar.kitchen, The Dock on Wallenpaupack, Cocoon Coffeehouse and Bakery or Kōl Steakhouse, you’ve experienced the culinary innovation of Executive Chef Ben Sutter. But we thought you’d like to get to know the man behind the menu.

The first spark of inspiration for a culinary career came from reading Chef Anthony Bourdain’s book, “Kitchen Confidential.” “He brought awareness to the link between food and culture and history and the connectivity of the human race,”  explained Ben. Before he came to The Settlers Inn in 2006, Ben had a varied and unconventional career cooking for some of the biggest stars in Hollywood. He earned his chops in the culinary industry working at legendary Southern California restaurants such as Saffron’s, The Sycamore Inn, Montage Resort, Hotel Bel-Air and The Palm in West Hollywood. A self-taught cook, Ben devoured all of the on-the-job training possible to hone his skills. 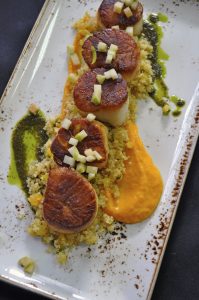 Ben had risen through the ranks in the kitchen when he decided to return to his Pennsylvania roots. He found a home at The Settlers Inn. Founder Grant Genzlinger really took him under his wing, and Ben credits Grant with being one of the most influential mentors in his career. The two share a passion for farm-to-table cuisine and working with local food purveyors to highlight the freshest seasonal ingredients. Ben relishes the opportunity to coax complex flavors from humble ingredients. He particularly enjoys elevating an ingredient that may be deemed basic, such as vegetables or pork belly, and turning it into something extraordinary. Field roast sausage is Ben’s latest muse. “I just discovered them. They go with everything and you would never know they’re vegan,” explains Ben.

Peeling Back the Layers

He describes his cooking style as “modern flexitarian,’ which means plant-based recipes that can flex to add fish, meat or dairy.

According to Ben, his favorite dishes are those that boast a high contrast in flavors. “I love when a dish can hit as many of the savory, sweet, bitter and spicy notes as possible without being overpowering.” His tastes at home skew a bit different, but that’s to appeal to the sensibilities of his two most frequent diners- his children. In fact, that’s why he considers Grilled PBJ his signature dish. When he’s not working, the Moscow, PA resident likes to spend his down time reading and playing with his kids.

In his role as Executive Chef for Settlers Hospitality Group, Ben gets to lead a team of talented chefs and craft menus for five distinctive restaurants. He savors the life-long connections forged through his position. For a chef who is grounded in the philosophy of sourcing local ingredients and helping to sustain the time-honored tradition of small family farming, it’s no surprise that his primary goal when cooking is to foster true happiness among guests.

Plan your next visit to The Settlers Inn to experience the culinary innovation of our farm-to-table restaurant. The menu changes seasonally. Check out our specials for the ultimate dining and lodging packages. We also have beloved annual events that highlight our award-winning restaurant, such as Storytelling Dinner, Candlelight Christmas and Jazz on the Deck.